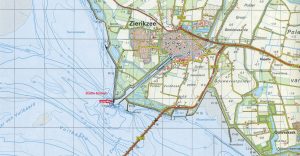 Location of Studio Bruinvis nearby the town of Zierikzee, the Netherlands

In the Eastern Scheldt, situated in the South-Western Delta of the Netherlands about 50-60 harbour porpoises (Phocoena phocoena ) are living. The former estuary is semiclosed by a storm surge barrier. The barrier contians gates of about 50 m wide and are sometimes over 50 meter deep. However due to the strong currents and noise made by the rubbing currents the porpoises stay away from the barrier. Only during the change of tide they come close by.

In this tidal bay Stichting Rugvin discovered that there are about 5 so called ‘porpoise hot spots’. At one of the harbour porpoise hot spot locations, located near Zierikzee, Studio Porpoise (Studio Bruinvis) has been placed in 2017. The whole installation contains a buoy with a hydrophone and a transmitter which is placed  at about 250 m from the jetty. And on the jetty an information pillar containing a sound receiver, data recorder and speakers are placed. Both wireless connected installations are powered by PV panels and batteries. 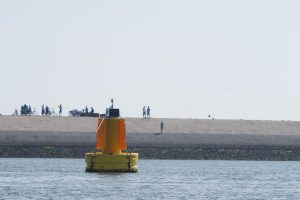 Many visitors go to listen and watch the porpoises

This unique novelty serves two purposes. One is to present the general public the uniqueness of having a wild living cetacean species in the Netherlands, which can be observed simultaneously by ear and eye. Since the installation more than 10.000 people have been listening here to the sound of the porpoises and often saw the mammals at the same time. The other purpose is to learn more about the species itself. The effects of abiotic and biotic actors (tidal currents, time of day, season and others) on the presence of the harbour porpoise are now being studied by analysing the recorded acoustic data. 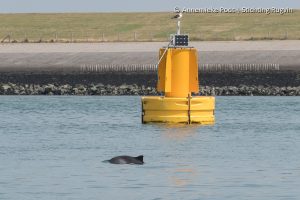 A harbour porpoise nearby the SB buoy

The recorded acoustic data, by using Pamguard software, shows that not only the tidal currents within the Eastern Scheldt are important for attracting prey for the porpoises around this hot spot, but also the day and night rhythm.

The general public loves to walk or cycle towards the pillar with the sound system on the jetty. More than 10.000 listening moments of 5 minutes are being recorded on the counter, meaning that during reasonable weather and at daytime about 42 % of the time people (1 or more) are listing to the sound of the hydrophone. 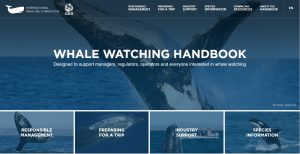 Studio Bruinvis as a case study within the latest IWC handbook

This unique combination of science and recreation has often been a topic for the media. National television, radio, newspapers, magazines and many websites presented the footage and sounds of Studio Porpoise. It has also been described in the IWC Handbook.

The Rugvin foundation performed many studies to porpoises in the Eastern Scheldt since 2009, like the Harbour porpoise Photo ID project. Due to this it is known that nearby the jetty of Zierikzee porpoises are often spotted. This porpoise hot spot even is one of the best and easy accessible places to spot porpoise in the Netherlands/Europe!

The access to this jetty has improved over the last years due to the creation of cycling and walking paths, and there are even benches placed to have a seat! It is the ideal spot to watch “our Dutch whale”!

Studio Porpoise allows visitors to listen to live recording sounds of porpoises swimming nearby, from a distance of several hundred meters. This means you can watch and listen to the animals that project their sounds (echolocation clicks) to find their way, catch preys and communication.

The Rugvin foundation realised Studio Porpoise together with her partners the World Wide Fund for Nature, National Park Eastern Scheldt, Natuurmonumenten, and the Municipality of Schouwen-Duiveland. In October 2016 Studio Porpoise was put into use.

If you are interested in placing or developing a Studio Porpoise, Whale or Dolphin in your country please contact us.