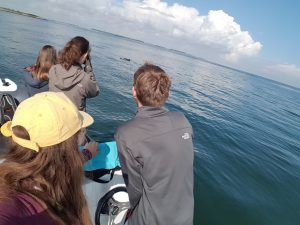 The Rugvin (Dorsal fin) foundation was established in 2007, after conducting a two-year project under the umbrella of the North Sea Foundation (SDN).
The foundation has the following aims:
1) To conduct research on diversity, population dynamics, behaviour of all whale species in the North Sea and to publish all found data to the Dutch audience on behalf of information and education.
2) To conduct all further needed actions connected with the above stated goal in the broadest sense.
3) The foundation tries to reach its goals by the conduction of systematic surveys at sea.

To achieve the above-mentioned goals and aims Rugvin conducts the following activities: 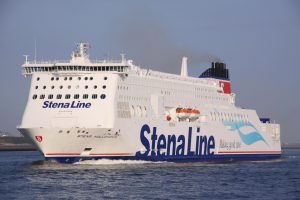 The surveys on the Stena Line ferries continued as described in the annual reports (Zanderink & Osinga, 2005 -2010). Observers spot cetaceans from the bridges of the ferries on a monthly basis. The total observing time is approximately six hours per survey day and each survey consists of two survey days. The first day of observation is on the Stena Hollandica, when the observers travel from Hook of Holland to Harwich. On the following day the observers travel back to Hook of Holland on the Stena Britannica. 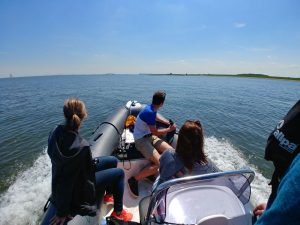 Research on the Eastern Scheldt estuary. 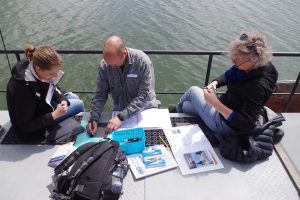 The work of the Rugvin foundation would not be possibe without the support and collaboration of organisations and companies mentioned below:

Stena Line
Since 2005, Stena Line, offers the Rugvin foundation the possibility to make use of the observation bridge of the ferries Hollandica and Britannica. Each month the crew welcomes our volunteers enthusiastically and offer us food and drinks. Also the crew itself who are well informed and aware about cetaceans, spot porpoises on a regular basis and register these sightings. The Rugvin foundation is grateful and thankful to the management and crew for their support and participation!

World Wide Fund for Nature
Thanks to financial support and good collaboration with the World Wide Fund for Nature, the dorsal fin foundation could organize the first official porpoise scan at the Oosterschelde. Besides the Rugvin volunteers, also fourteen “Lifeguards” participated this scan. The WWF enabled the possibility to use several boats for the scan, and they contributed to the purchase of the hydrophone, which could be used during the scan. Also the later scans were financially supported by the WWF. In addition, the WWF made it possible to purchase the C-pods, which were used for acoustic research in the Oosterschelde.